For the first time in 14 years, the forests around Dunoon will echo to the sound of rally cars this weekend as the ARR Craib MSA Scottish Rally Championship heads to the Dunoon Presents Argyll Rally (24th June).

Having previously run in 2013, the Argyll rally has been reborn and is made possible thanks to the support of Dunoon Presents which aims to support local business by bringing the event to the town. The rally is organised by Mull Car Club and forms round five of the Scottish Rally Championship, bringing around 70 crews to the region during the weekend for the event.

Dunoon Stadium will house the rally for Friday and Saturday with Rally HQ, documentation and scrutineering all taking place at the facility. It will also play host to the rally service area on Saturday where crews will get the opportunity to work on their cars twice during the day’s six stages.

The rally kicks off in Argyll Street, Dunoon for the ceremonial start on Saturday morning before heading away to tackle some 42 competitive stage miles in the forests around the town.

Leading the field away from Argyll Street, Dunoon on Saturday morning will be two-time Scottish Rally Champion Jock Armstrong in his crowd-pleasing Subaru Impreza. The Dumfries and Galloway man will be co-driven by Paula Swinscoe and will undoubtedly be looking to close the gap in the series to current championship leader Euan Thorburn.

Thorburn and co-driver Paul Beaton start number two seed in their Ford Fiesta R5, fresh from a win at the last round of the series in Dumfries but have their eyes firmly fixed on a victory here in Argyll. 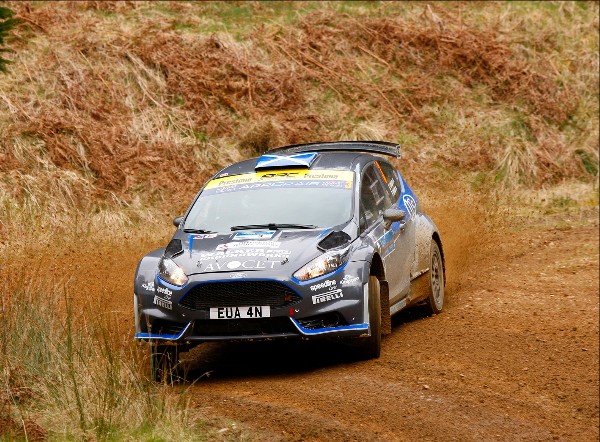 
Third on the road, Mike Faulkner and Peter Foy head the Mitsubishi contingent in their Evo IX at car four, narrowly missing out on a podium at the Scottish Rally last month they will aim to go several better here.

In fourth, Shaun Sinclair and Jamie Edwards bring their fantastic Subaru Impreza WRC to the event after a podium spot last time out. An SRC win has eluded Sinclair so far this season, but with no real previous experience for any of the front running crews of the Argyll forests, this could be his first. Sinclair has the honour of winning the event the last time it was run in 2003.

Iain Wilson and Will Rogers break the mould with their Subaru Impreza at nine, with Simon Hay and Calum Jeffray rounding off the top ten in…you guessed it, a Mitsubishi Evo VI. They will be followed by around 60 competitors from across the UK who will make the trip to the event to contest classic stages in Argyll.

Chris Woodcock, Clerk of the Course for the event is excited to be bringing the sport back to the region once again.

“There is so much rallying history here in Dunoon it really is a true honour to be bringing rallying back to Argyll after so many years away,” he says.

“It’s certainly not been an easy task but thanks to the immense support of Dunoon Presents and of course the local townsfolk we have been able to get the event off the ground once again. Spectators will be in for a treat too as the Scottish Championship is considered one of the best in the UK so the action will be fantastic on the stages. We hope everyone has a safe and enjoyable day’s motorsport”.

Lucky crews will return to spray the champagne at the ceremonial finish the Stadium at around 4.00pm.

Argyll Rally souvenir programme contains spectator information and timings and is available from the following outlets in Dunoon.

You can keep up to date with results and live news throughout the event via their social media feeds, or the website at www.argyllrally.co.uk

First known as the Burmah Rally, the event originated from the early 1970’s where the British Rally Championship assembled in the region and saw classic battles in the local forests with names such as Roger Clark and Jimmy McRae.  Last run in 2003 by Lankarkshire Car Club, the event fell victim to the austerity measures of the era and without inclusion in the Scottish Rally Championship in 2004, ended an almost 40 year history.