Duns rally driver Euan Thorburn scratched his name on the winner’s trophy of the Dunoon Presents Argyll Rally for the second time in his career, winning the closely fought event by over a minute from his nearest rival on Saturday (22nd June).

Driving his Ford Focus WRC, Thorburn and co-driver Paul Beaton powered to victory after eight stages in the Argyll and Bute forests, enduring technical forest tracks and high-speed sections to further cement his place as leader of the Scottish Rally Championship.

However, the final leader board does not show the intense battle between Thorburn and fellow Duns pilot Garry Pearson who challenged for the lead throughout the day, with a puncture sending him, co-driver Dale Bowen and their Ford Fiesta R5 tumbling down the standings to second. Banchory’s Bruce McCombie and Michael Coutts were a distant but worthy third in their Ford Focus WRC.

With a rich heritage, the Mull Car Club organised rally made a return in 2017 after over a decade away as some of the best drivers in the UK all bid to add their name to the winners list which includes Roger Clark and Jimmy McRae.

Motorsport fans flocked to Dunoon Pier on Saturday morning to watch the ceremonial start as crews were flagged away before heading into the classic forest stages such as Gairletter, Bishops Glen, Glenbranter and Coire Ealt.

Tricky and unpredictable conditions greeted crews on the opening loop of tests, but it couldn’t be closer on the first stage of the day. Both Thorburn and Pearson stopped the clocks on an identical time which was certainly a sign of things to come during the day. John Wink and Neil Shanks were second in their Hyundai i20 R5 but significantly off the leaders – 13 seconds back after just 4.73 miles of action. 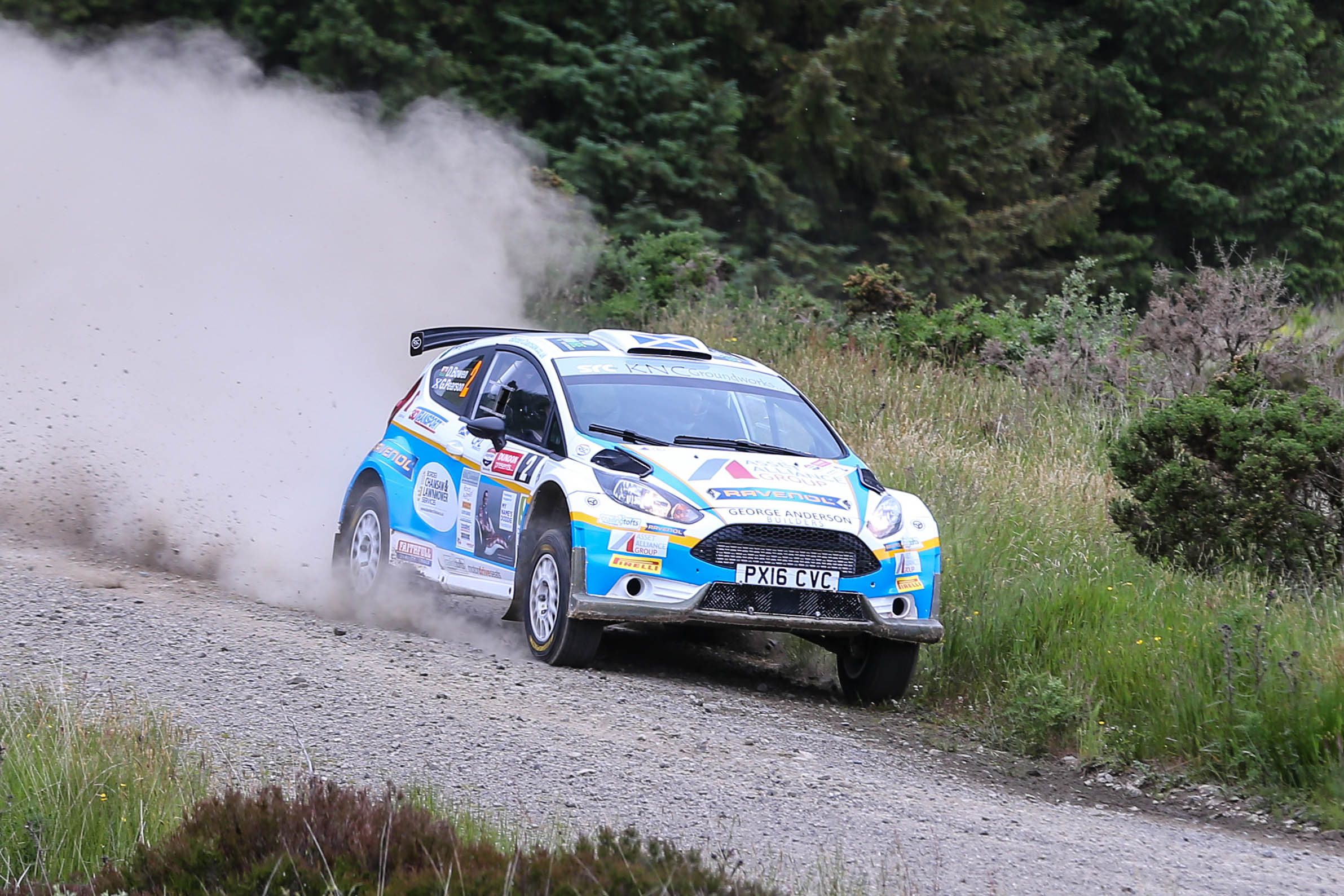 Pearson suffered a puncture which put him out of the fight for victory – 2nd
– image: Eddie Kelly Motorsport Photography
Drama unfolded on the very next test with Thorburn suffering a puncture in the Focus, dropping over 16 seconds in the process and putting Pearson in control of the rally. Mitsubishi Evo IX driver Michael Binnie and co-driver Claire Mole moved into third but would later drop down the order with driveshaft issues.

Into the first service of the day at Dunoon Stadium, Pearson was comfortably in the lead but just one stage later, it was slashed to just six seconds as Thorburn went on a mission to regain the lost time. Six seconds became two by the second pass of Glenbranter but then Pearson’s lead became a deficit, dropping a whopping 56 seconds with a puncture. Such was his buffer, he retained second, but the damage was done and Thorburn returned to Dunoon to spray the champagne as victor, adding to his 2017 win on the event.

“It wasn’t ever going to be an easy event so I`m really pleased to take the win here today” said Thorburn.

“The stages are awesome; a great mix of technical sections and some fast and flowing parts too. We didn’t have it all our own way of course, two punctures today and a wrong tyre choice didn’t work this morning, but we made some changes which allowed me to push. Certainly looking forward to the final two rounds of the SRC now”.

Almost two minutes back, McCombie was delighted to bag a podium in the ageing Focus WRC, overcoming several stalls throughout the rally to take third place in his first rostrum since 2018. After a fight back up the leader board, Binnie was able to claim fourth with Thomas Gray and Harry Marchbank rounding out the top five in their similar machine.

In the battle for two-wheel-drive honours, it was heroic performance by Iain Wilson and Chris Williams to recover from seventh on the opening stage, to win the category in their Ford Escort MK2. After solving electrical gremlins on the first loop, they battled back to the front to beat Dumfries driver Mark McCulloch and Michael Hendry in their newly acquired similar machine.

Clerk of the Course Chris Woodcock is delighted by the response to the rally by the local community once again.

“Yet again Dunoon Presents, local businesses and the townsfolk of Dunoon have welcomed us with open arms, and it’s been a real honour to hold the rally here again this year” he said.

“They really do embrace the event and the crews, which makes it even more special for everyone competing and organising the rally. The forests are true classic tests of man and machine and we hope everyone both out on the stages and in the town enjoyed having us back again for the third successive year”.